Jaundice, also known as icterus, is a term used to describe a yellowish tinge to the skin and sclerae (the white part of the eye) that is caused by hyperbilirubinemia (an excess of bilirubin in the blood). Body fluids may also be yellow. 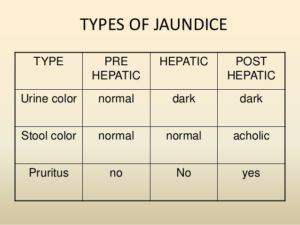 Bilirubin is a waste product that remains in the bloodstream after the iron is removed from the hemoglobin, which is released from the degradation of erythrocytes (cells that contain hemoglobin and can carry oxygen to the body).

When there is an excess of bilirubin it may leak out into surrounding tissues, saturating them with this yellow substance.

Bilirubin that is circulating freely in the blood is called unconjugated bilirubin. One of the liver’s functions is to filter out waste, such as bilirubin, from the blood.

Once it is in the liver, other chemicals latch on to the bilirubin, creating a substance called conjugated bilirubin, which is secreted in bile (a digestive juice released by the liver) and then excreted.

Jaundice is most common in newborns in most cases. It occurs as a result of the liver being underdeveloped and not fully functional. In most cases, it is seen that there is nothing to worry about neonatal jaundice as it does not require any form of treatment, and it usually resolves within a week or two.

Jaundice in adults is usually a sign of an underlying health problem. There are three types of jaundice:-

The most pervasive sign of jaundice is a yellow tinge to the skin and sclerae (whites of the eyes). This usually starts at the head and spreads down the body.

There are three main jaundice overview types of symptoms:

Jaundice most often occurs as a result of an underlying disorder that either causes tissues to become over-saturated with bilirubin or prevents the liver from disposing of bilirubin.

Some underlying conditions that may cause jaundice are:

Adult: Jaundice is related to the function of the liver, so it is essential that you maintain this vital organ’s health by eating a balanced diet, exercising at least 30 minutes five times a week, and refraining from exceeding recommended amounts of alcohol.

Newborn baby: It is not possible to prevent newborns from being affected by jaundice. Ways to prevent it from becoming serious with current precautions are: