What is a leptospirosis?

Leptospirosis (also known as Weil’s disease) is a disease caused by bacteria (Leptospira interrogans) that produce a wide range of symptoms that may occur in two phases; some patients may develop kidney or liver failure, respiratory failure, meningitis, or even death. The disease is spread by the urine of infected animals from many species, both domesticated, such as dogs and horses, and wild, such as rodents or wild pigs. The bacteria can survive in the water and soil for months. The disease is most common in temperate and tropical climates.

In general, leptospirosis is considered weakly contagious. This is because, like other animals, humans can shed leptospirosis in the urine during and after illness. Consequently, individuals exposed to the urine of humans who are infected may become infected. For example, although the bacteria are not airborne and have a low risk of being in saliva, individuals handling wet bedding or blood-soaked material from an infected person can increase the chances of getting the infection. There are a few reports of transmission between sexual partners, but the incidence of this type of spread seems very low. Unfortunately, pregnant mothers who get leptospirosis can infect their fetus.

The contagious period for leptospirosis depends on how long viable organisms are shed in the urine. Most individuals will shed organisms in the urine for a few weeks but there are reports that humans can continue to shed the organisms in urine for as long as 11 months. Some experts suggest that there is risk for up to 12 months after getting the initial infection.

What are leptospirosis symptoms and signs?

The symptoms and signs of leptospirosis are variable and are similar to those seen in many other diseases (dengue fever, hantavirus, brucellosis, malaria, and others). Symptoms can arise about two days to four weeks after exposure to the bacteria. Although some people have no symptoms, others may exhibit 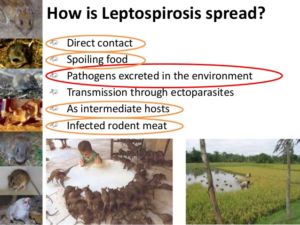 How can leptospirosis disease be prevented?

Scientists have developed vaccines that seem to provide some protection against leptospirosis. Vaccines for humans are only available in some countries, such as Cuba and France. However, these vaccines may only protect against certain forms of Leptospira bacteria, and they may not provide long-term immunity.

If you work with animals or animal products, you can lower your risk of infection by wearing protective gear that includes:

You should also follow proper sanitation and rat-control measures to help prevent the spread of Leptospira bacteria. Rodents are one of the primary carriers of infection.